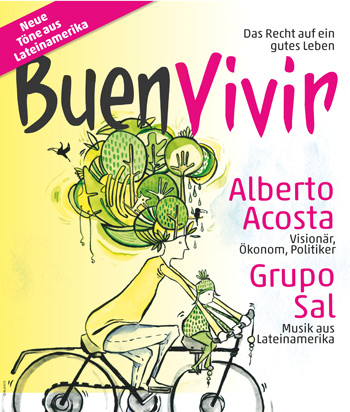 Man and nature live in harmony – without the constraints of growth.

What perspectives are linked to this concept?

Can this indigenous concept also be implemented into our western

To stimulate and fuel the discussion about Buen Vivir in German-speaking countries as well, the Latin American music group Grupo Sal and Alberto Acosta, present a programme that provides an informative but also an artistic approach to the idea of a good life together.

Alberto Acosta – politician, former Minister of Energy and Mines and President of the Constituent Assembly of Ecuador – presents his ideas and visions and talks about his experiences with the political implementation. He was instrumental in establishing the principles of Buen Vivir in Ecuador’s constitution and among others, he founded the globally respected Yasuní-ITT initiative.

By taking indigenous concepts and ways of life of Buen Vivir into account, he plans alternatives to western concepts of development and progress in the form of a sustainable economy that respects the limits of the planet and serves humanity.

The subsequent conversation with the audience, emphasises the ideas from his lecture.

‘Sumak Kawsay’, also known as Buen Vivir, is a way of life of the indigenous peoples of the Andes. Latin American politicians have called for an integration of this way of life into industrial societies as well, which is why his philosophy is increasingly gaining international traction. Buen Vivir doesn’t only aim at a life in harmony with nature and all beings, but in concrete terms it also means a new ‘ethic of development’. The core ideas include a social and supportive economy as well as the renunciation of development concepts based on constant economic growth.