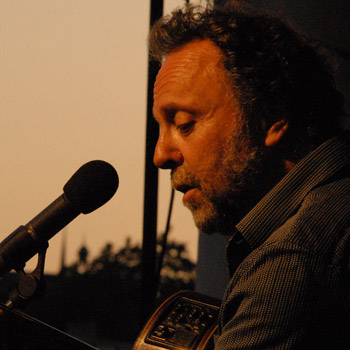 Born in Santiago de Chile in 1955, he left his homecountry in 1971 and moved to Germany together with his family. There, he found his path to music and started studying the guitar with different private teachers in Munich.  As the co-founder of the music group Salitre (Munich),  he first appeared in the lime light in 1974. In 1982, he founded Grupo Sal as a duo together with Fernando  Dias Costa. He was a singer,  guitarist and  percussionist. Up to 2014, he played an important role in the creation, acquisition, planning and  carrying out of different programmes of Grupo Sal. He has always shown a close concern for projects in  Central- and South America. In 1987,  he went on tour to Nicaragua with the „Pit Jansens Group“ and between 1996 and 1998 he played as a member of the  „Duo Sur“., Since 1993, he has been a chairman of Pan y Arte e. V.,  an association  supporting cultural and  humanitarian projects in Nicaragua. In 2015, he finished working as a co-manager for Grupo Sal, but he remains an active partner.