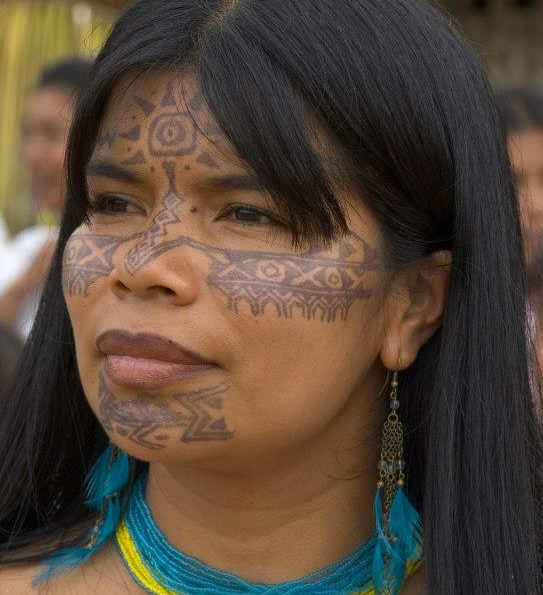 Patricia Gualinga was a speaker for the indigenous Kichwa community Sarayaku in Ecuador for a long time. From the beginning, she was at the forefront in the battle against the invasion of international oil companies into the territory of the Sarayaku. She was a key figure in the lawsuit against the state of Ecuador at the International Court of Justice and a strong leader in a steadily growing feminist movement fighting for the protection of the Amazonas.

She travelled the entire world as an ambassador: at international events like the UN Conference for indigenous peoples in New York and the Climate Change Conference in Paris.

Patricia Gualinga puts the fight for territory and a life in harmony with nature into a larger context of international efforts to achieve a more sustainable future. The conservation of traditions and rich cultural identities and the approach towards so-called modernity open a creative space for the indispensable dialogue and exchange during a time at the crossroads.

Belonging to the indigenous Kichwa, the Sarayaku community lives in the Amazon rainforest. It calls itself the “people of the zenith”, a term which stems from an age-old legend. The community is world-famous and is thought of as a symbol of indigenous resistance against the invasion of large oil companies into their territory and the manifestation of independence between tradition and modernity in our globalised world.

The community became world-renowned due to a long-term struggle against international oil companies. The small community sued the state of Ecuador at the highest international level, at the International Court of Justice, in 2002. The government had approved of the drilling in the territory of the Kichwa without the permission of the community. The community wasn’t intimidated, and the community received 1.3 million dollars as compensation.

The community used this money to establish the first indigenous bank in Ecuador, an own education institute and even an own airline. The community still managed to maintain its indigenous lifestyle, a life in harmony with nature.